.there is no such thing as a “self-made man” 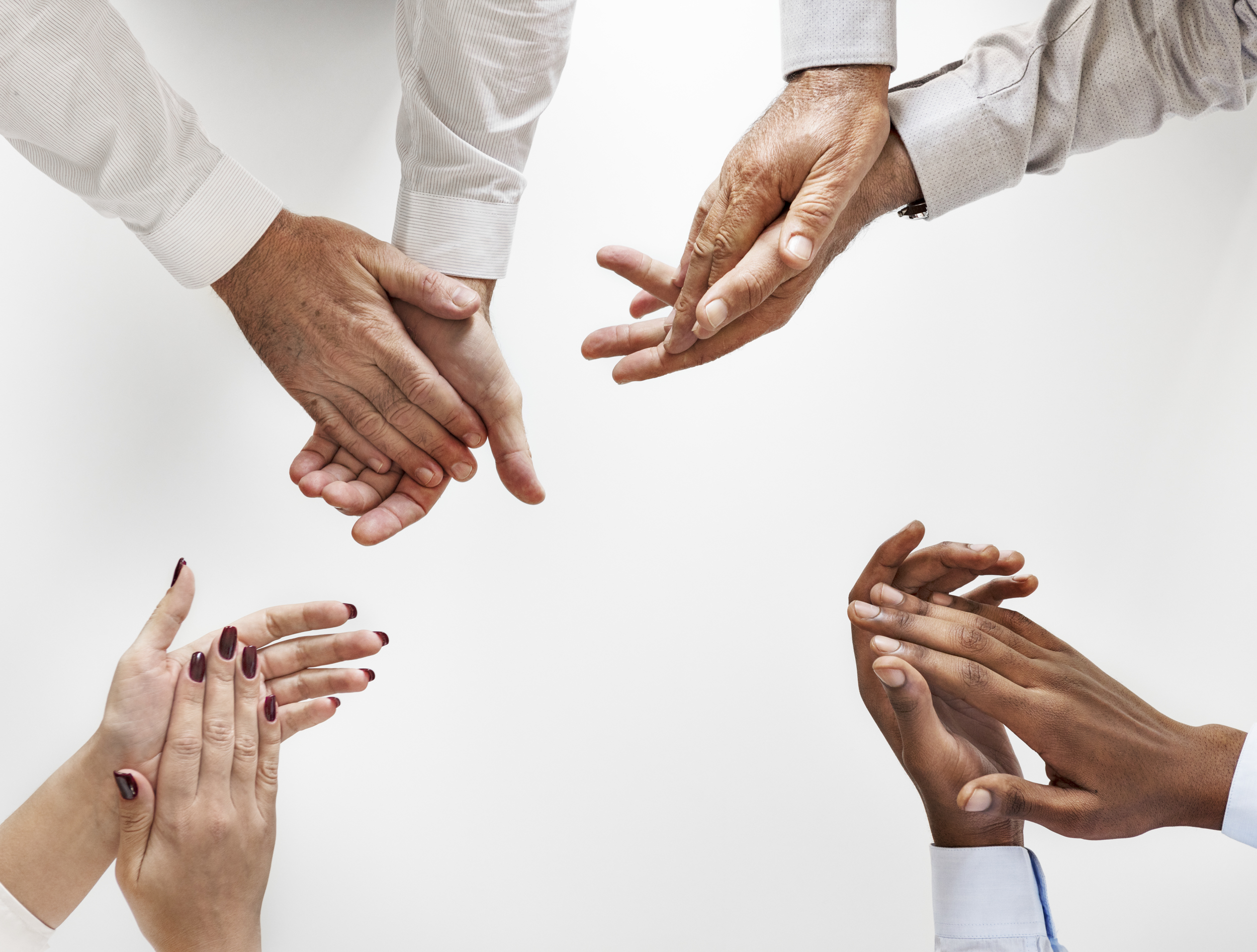 There is no such thing as a “self-made man”. We are made up of thousands of others. Everyone who has ever done a kind deed for us, or spoken one word of encouragement to us, has entered into the makeup of our character and of our thoughts, as well as our success.’

American movies with their American Dream theme have been feeding us that anyone can work their way up to the top with just hard work, dedication and taking responsibility. In tech bubble where I exist, left and right, I get overwhelmed by the plethora of stories screaming success of the “self-made” mill and billionaires. Seeing the same names over and over again on the major conferences and hearing them recite one by one by one that we can be like them once we are equipped with the right mentality can be… demotivating. Especially when you feel you’re following their recipe religiously and the cake still comes out sad.
Yet, self-help books authors’ riches are baked of such success stories. Some balance on the sect-like vibe where naive, vulnerable followers pop such harmful advice like candies. Think of a parking space in a crowded parking and it will appear miraculously. Imagine yourself drinking cocktails with umbrellas basking in the sun and poof – it’s your life now.
Herbalife, Amway, Lyoness and other multi-level marketing Ponzi schemes forage on this self-made promise. (If you don’t believe me, watch Betting on Zero, a 2016 American documentary directed by Ted Braun about MLMs).
The truth is that you can’t achieve a huge success alone, and it’s really difficult when you’re starting from scratch.

Don’t get me wrong. If you know me, you know that I’m a forever smiley optimist and even if I get my ass burned and promises broken by others, I always see it as a positive lesson. When someone says that something can not be done, I will do everything to prove them wrong. Watch me.
I have an infinite belief in goodness and awesomeness of people. I surround myself with go-getters and optimists (or rather, realists with a positive growth mindset) who don’t wait for magic signs but make things happen today.
Yet, over the years of meeting and observing highly accomplished people, I realised that while self-made myth may be a great start to have your motivation pumped up, to really succeed, you need to learn to ask for help and stand on the shoulders of the giants. You need to surround yourself with people who are ahead of you and had paved a way you want to go on. How? Give to receive.

Jim Rohn was not far off when he said we are the average of the five people we spend the most time with. This relates to the law of averages, which is the theory that the result of any given situation will be the average of all outcomes. If you stay around people who just find excuses, then you’ll start seeing everything as an obstacle. And vice versa.

So… while it’s a great sell, even Musk or Bezos didn’t achieve it all by acting alone. Forbes’ 400 richest American people? It boldly states that 70% of that list made their fortunes entirely from scratch. The facts tell a bit different story. Researchers at a Boston-based group, United for a Fair Economy thoughtfully analysed these claims and concluded that most of the ultra-rich were born with significant economic advantages, and have benefited from a level of privilege unknown to most Americans. More than 60% of those on the list all grew up in privilege, with inheritances up to $1 million.

Yes, Elon Musk may have made $22 million by himself within just a few years of graduating college. But he also had the privilege of his parents paying to get him through college, and he took a double-major. He didn’t need to worry about making night shifts to pay for his tuition or what will happen if his startup fails, because maybe, just little maybe, it helped that Musk’s dad owned an emerald mine in South Africa and his mother was a well-known model. Musk’s dad paid for Musk to go to America, bought him an apartment, schooling, capital for a business, etc.
Similar situation with Gates. Would he be equally successful if he was born in extreme poverty in a remote part of Africa? Even the poorest person who rises up the rank does so because somebody brought him or her to this world. Somebody provided him a minimal food and medicines to grow up, somebody believed in her to provide their first opportunity. If you are lucky to have an access to the internet, safety and a roof over your head, then you should appreciate that and pay it forward whenever you can.

There are many hardships that those who weren’t born relatively well-off in the first place. Whether you like it or not, upward mobility largely depends on factors such as one’s location, initial social standing and racial identity.
A well functioning, non-corrupt government also plays a big role in your chances to succeed. Many business leaders depend on funds from the government. Their companies rely on public infrastructure or they were able to protect their ideas for innovations through property laws, or that they pay fewer taxes on their income and assets, at least in the first years of starting up. In America alone, there are also more than 11.8 million millennials born into families worth more than $100 000, and there is a possibility that the richest of our generation will soon begin to inherit $30 trillion from previous generations, and this is happening during a time period of unprecedented wealth inequality.

And while I don’t envy others to have been raised by rich parents and being presented with a strong start (it wouldn’t change my situation if I did, anyway), it sometimes makes you wonder – what does it take to create such opportunities and can you do it while keeping your moral spine unbroken? Are we only little hamsters on a wheel fooling ourselves that there is an award after pushing ever harder? Does success flavoured with sweat and tears taste much better than the one showered in Don Perignon, or it’s just a sweet little lie we tell ourselves to feel better?
(Damn, this post starts having a real culinary vibe with all my comparisons… but while we’re on the cooking subject, I know one big self-made success story – the one of Jesse Pinkman and Walter White’s 😃.)

Ok, I digress a little. Again.

Another of tech gods, Jeff Bezos, the founder of Amazon and arguably one of the richest CEOs in history is often quoted as a self-made business man. Without denying that Bezos is a smart guy, the “self-made” claim involves – you guessed correct – his parents money. A while after he launched Amazon, there was a 70% chance, as he told his investors, that the company would fail. But Jeff’s parents rescued the business by investing about $250 000.
Having close ones that can afford to give you that start-up capital while you have had not yet success story to back your bets, is a rare privilege. Not without reason it’s called FFF (friends, family and fools).

Ubuntu, we thrive together

Whether you look at it spiritually or not, everything is connected in this world. And this concept of unity and interconnectedness is not new. Humans have been knowing it for thousands of years. For example, Ubuntu is an African philosophy meaning humanity (yes, also a Linux system, I know, I know). It is often translated as “I am because we are,” or “humanity towards others” and exemplifies that we grow and thrive through others. Humans have progressed to such a degree because we have used technology, tribalism, and community to create riches. When Gutenberg invented the book print 500 years ago, suddenly we were able to spread knowledge even faster, making bigger leaps in science and philosophy. Today we’re on the verge of a new revolution making even steps towards interconnectedness with the promise of AI. We have all the tools available but often we compete against each other rather than collaborating with each other.

I’m a huge advocate for women in tech (and women in business in general) and it’s breaking me to say but the biggest homo homini lupus are often women towards other women. Most of my biggest allies are men who understand that we should help each other out, that together we all benefit from diverse ideas and perspectives. Around 90%-95%% of my C-level connections are men. One fact is that there are simply still less women in C-level positions, but another is that those who do reach the top, are for some reason unlikely to help other women. I promised myself not to be such example.

Even if you’re the most creative person, ideas can only get you that far. To be most successful you need to admit that you don’t have all the answers and seek help of those who might know what you don’t. You need to actively seek out people who can help you on your journey and don’t be afraid to ask for help. Hide your pride deep in your … pocket. Play to your strengths and find others who can fill your weaknesses.

I’m a visionary and a people person, but I’m less strong on attention to detail. I’m tech savvy but I can’t code my vision down and make it tangible. I need others with such skills. Everything is a team sport. No matter if you want to build a company, a community or make a baby 🙂 Nothing can be built solely by the efforts of one person. You’ll rely on other people.

And while others inspire you and help open doors, it is your responsibility to prepare yourself and go right through them. Like with everything, if you do attract the right opportunity but you won’t act on it by putting your best self to it, you’ll not get another chance. Nothing goes further and is stronger than a good reputation and a word of mouth.

Be glad that you had it harder

I have much higher respect for those who worked their way to the top and came with little. Those people usually know the value of money, and are incredibly grateful for the opportunities that others have given them. I know I’ll be forever grateful to all my friends and colleagues who helped me become who I am and gave me all the opportunities to be part of our incredibly impactful projects via Untrite or my volunteering at Girls in Tech, and I will pay it forward, whenever I can. Thank you. You know who you are.

.written in the air, POZ-BGY

.you have the power to change lives…yes you, Mr. Corporate Man